Here are a few summarizing points to help if you haven’t got time to read the whole article on "How do Guitar Strings Produce Their Sound?" now:

I hope you find this content interesting and useful and that you find time to read the full article. You can also find lots more guitar tips in the free online FRET SUCCESS ACADEMY!

This is an easy one, vibrations and acoustics cause a guitar string to produce their sound.

If you’re sensible, you’ll take this sentence and call this topic of “How do guitar strings produce their sound?” understood. However, if you want to know more on this interesting topic, then read on for more juicy content. 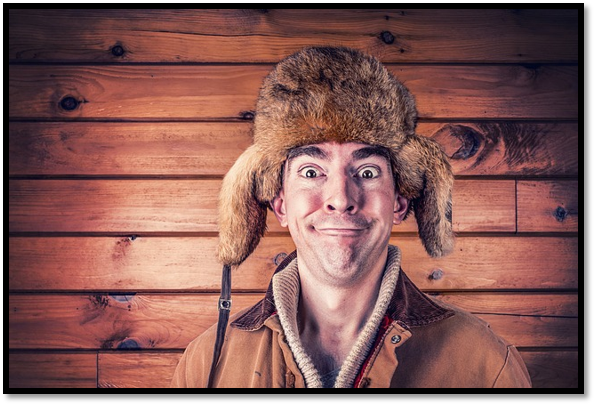 This information isn’t just applicable to guitars, it applies to all stringed instruments. Note that I’m not going to go into all the little details about this topic, as it’s too much for this article but I’ll give you enough information to give you a better understanding and whet your appetite to read more into how guitar strings produce their sound.

When a guitar is not being played, it obviously doesn’t make any sound; well most of the time…

Let’s think about how you make a guitar create sound in the first place? Well you either pluck or strum the strings, right? But first, let’s talk about this in terms of energy transfer to help understand how do guitar strings produce their sound?

As the string is under tension and secured at both ends, an oscillation occurs with the string moving back and forth past the rest position. The string then vibrates, and now we have the first building block for the string to produce sound.

The motion of this string then interacts with the air around the string and turns the kinetic vibrational energy into acoustic energy or “sound”. Let’s go into that a little deeper.

You’ve probably heard that there isn’t any sound in space and this is true (well not sound that humans can hear), this is because there isn’t much “stuff” for it to transfer the energy through; an air vacuum. The fact is that for the vibrational energy in a moving string (or any vibrating source) to be heard, or considered as sound, there needs to be a medium for it to transfer to and propagate through.

When we play the guitar (assuming you’re not in space here), this medium is the particles in the air! We also get an energy transfer through the vibration of the guitar but I’m not going into this now, it’s less relevant to the topic of how do guitar strings produce their sound.

The vibrational movement of the string causes local air pressure changes to occur, which is more commonly known as sound intensity/pressure. This sound intensity/pressure then propagates and changes through the air, as what we know as sound, and eventually reaching our ears. However, this level of sound from the strings alone is very small, just think about an unplugged electric guitar. It’s the rest of the instrument that helps amplify this signal either electrically or acoustically through body/sound hole.

If you found this article useful then please give an UPVOTE to let me know!!

The pitch of a vibrating string is essentially determined by the tension/stiffness, mass, and length of the string and is related to something called the natural frequency (often referred to as the fundamental frequency or just the fundamental). The physical relationship is based on a mass-spring system for a resonant oscillation. 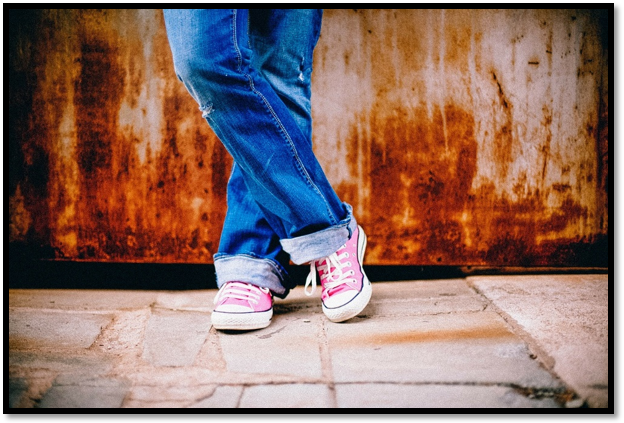 The vibration of a guitar string involves a standing wave concept (as both ends of the string are clamped by the nut and bridge, changing the way it behaves). The phenomenon of standing waves also causes other frequencies to be produced, called harmonics/harmonic series, which relate to the fundamental resonant frequency.

What is a standing wave?

The fundamental standing wave is apparent when the system is excited at its natural frequency. The natural frequency, Hz is the frequency that the string wants to vibrate at. You can easily see this happening with your guitar when there is an external sound that excites the guitar string, such as a bass guitar. If a bass guitar note of A is struck near a guitar, you will find that an unattended guitar’s A string will start to ring/vibrate. This is because an external acoustic force is exciting the string at its resonant frequency. It loves it!! 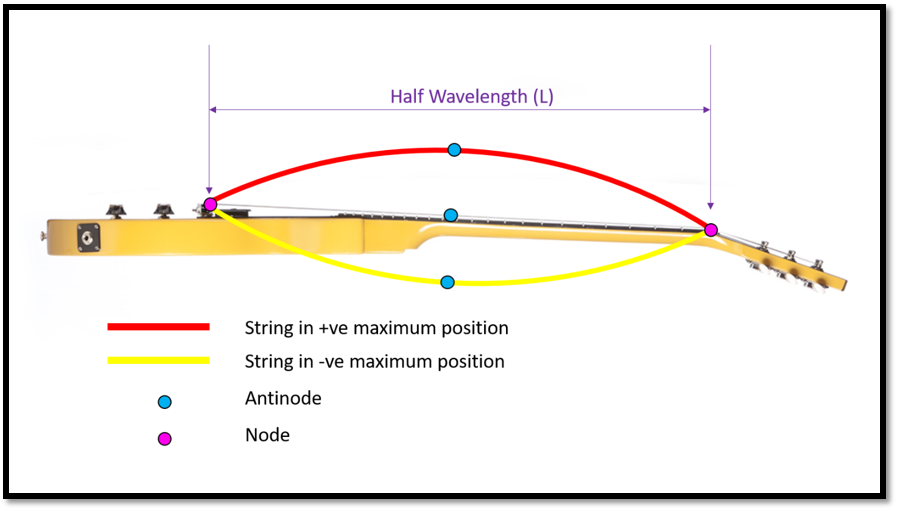 The above diagram shows the string vibrating at its natural standing wave frequency at a snapshot in time. The string will go up and down/back and forth, but the center point will always be where the maximum movement/displacement occurs. This is called the Antinode. The points where the strings are clamped are called Nodes. This state of the string shows the half wavelength.

So how does this relate to pitch? 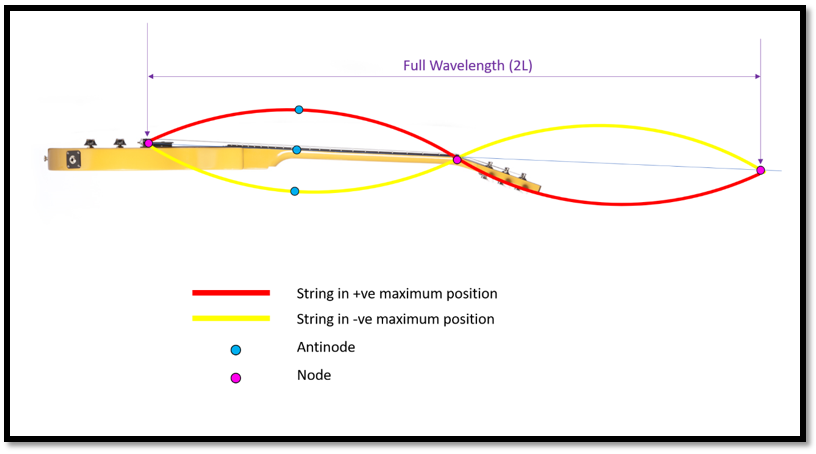 We can then determine the natural frequency of the string vibration using the following equation, which describes the relationship between mass, tension and string length for a standing wave:

Pitch is directly related to the frequency of sound, being the descriptor for the way that humans determine and hear the different frequencies of sound.

There are other higher frequency resonances that occur in the guitar string, which relate to the fundamental; typically, by a whole number. These are weaker in amplitude compared to the fundamental but help add the richer/more complex sonic properties to a resonating guitar string. These are called harmonic frequencies. The harmonic frequency number relates to the number of half wavelengths in the string’s vibration. The diagram below shows the third harmonic, as there are three half wavelengths in the string vibration.

You can see this easily if you have a recording setup at home. Just record a guitar string being played and then listen back with a frequency analyser on the channel and you will see the fundamental note (f1) and harmonics (f2, f3 etc).  The diagram below shows this for the A note with the fundamental at 110 Hz, 1st harmonic at 220 Hz, 3rd Harmonic at 330Hz. 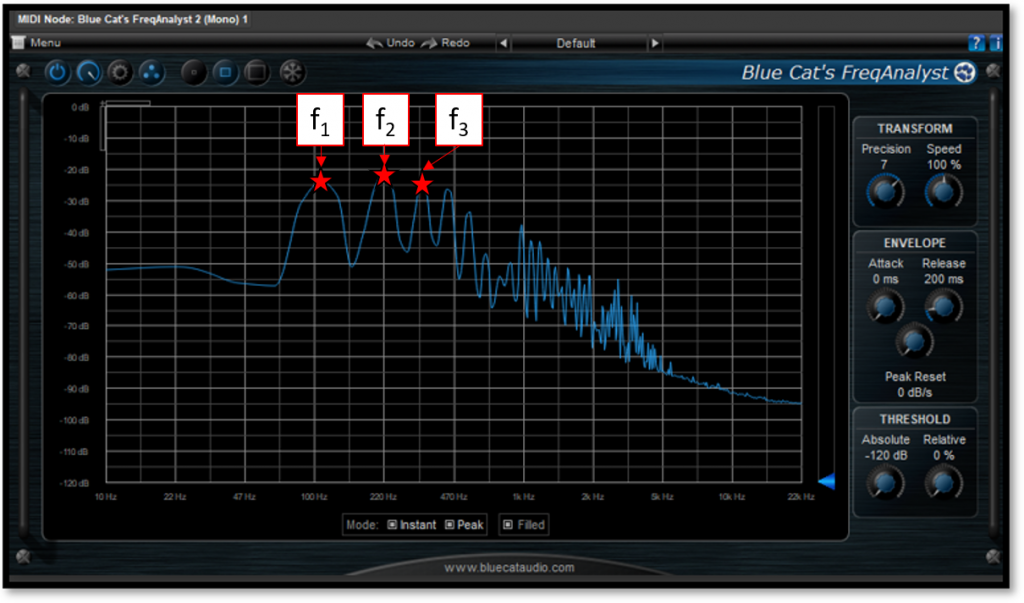 Have you noticed that when you strike a chord on a guitar it doesn’t ring out forever? Some guitars have pretty good sustain but eventually, the sound from the guitar strings will stop. It’s also obviously due to the vibrational energy lost as sound but that’s a given.

It’s also because there is an element of damping applied to the guitar strings through the various restrictive parts of the instrument including bridge connection, nut, guitar neck, guitar body and basically anything coupled to the string in some way, including the air around it. You just need to think of damping in terms of something that converts the kinetic energy in the active string to another form of energy, mainly vibration and acoustic energy but also an element of heat too.

We’ve been through the physical elements that cause a guitar string to make acoustic energy or sound. However, let’s just briefly go through how an electric guitar generates sound from the vibrating strings.

The way an electric guitar produces sound is completely different from the way an acoustic one (forget about electro-acoustic for now). You’ve probably guessed that the pickups have something to do with this and you’d be right; it’s obvious from the name if you think about it (pickup = pick up the sound). These wonderful things called pickups are basically metal poles placed in a magnet with a wire coil wrapped around them. Why do you think that is? Do you have an idea, is the pickup just like a microphone that picks up the sound from the guitar strings? First, let’s look at what a microphone is. 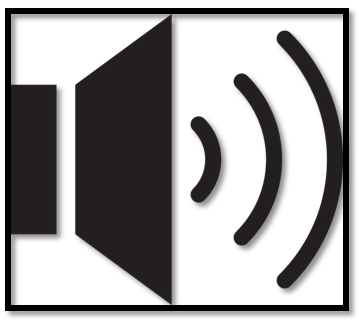 A microphone can be used to pick up sound from many sources of different amplitude, but an electric guitar is a very quiet instrument, quieter than a voice. If you’re a performer, you’ll know that using a microphone to amplify a quiet instrument is a nightmare in a live performance environment and can produce feedback issues very easily. If guitar pickups were microphones then we would have so many issues with them and would likely pick up other sound sources with higher levels over the guitar, which wouldn’t make sense in a live band scenario.

Guitar pickups generate “sound” in a completely different way to microphone. The strings sit in a magnetic field produced by the pickup and it is the movement of the strings within that field that cause fluctuations in voltage. These voltage fluctuations are then sent to the amplifier via your guitar lead. The voltage is then converted by the amplifier and loudspeaker into acoustic energy, which you then hear. This is a far more efficient way of getting a better signal to noise ratio from the guitar string movement.

So, what about an electroacoustic guitar well these can use up to three mechanisms to generate the sound from the guitar strings. These are a magnetic pickup, piezoelectric pickup or a microphone. The microphone is mainly used to get the sound generated from within the sound hole, to give that extra realism that is expected from a natural acoustic guitar sound. The under saddle piezoelectric pickups are very common but typically give a very unnatural guitar sound.

I hope this article helped you to understand more about the elusive topic of "How do Guitar Strings Produce Their Sound?". I could carry on further and, in more detail, but thought this was a good place to stop for now.

I also have lots of free guitar lesson guitar available when you subscribe to the Fret Success Academy.